Earlier today I mentioned the new Eyefinder control by Tim Dawson. I said I would like to see it in RSS Bandit. Here's a screenshot of what I have in mind: 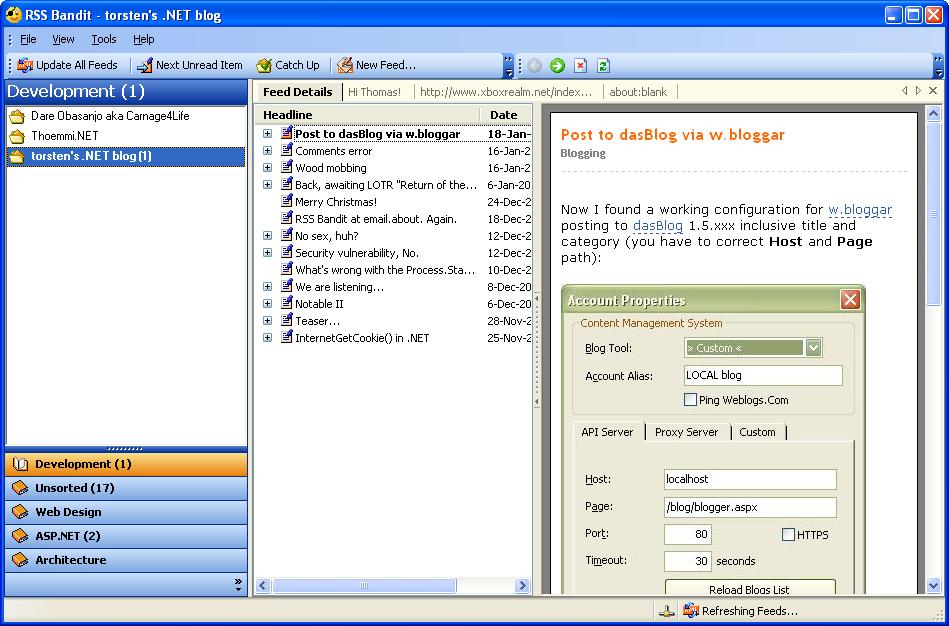 Ok, I admit this screenshot is faked. First I tried to implement it in RSS Bandit myself, but unfortunately, the sources are messed up (though it's good to have them) . At least for me I didn't see a chance to install my desired changes. Dare and Torsten, how about some refactoring? IMHO the aggregation code and the GUI are too merged (Currently the main window's source file is about 8100 lines).

Anyway, no offense. This should just give an impetus.

PS: How could Tim conceive to call his new control EyeFinder???

Eyefinder is a powerful presentation-layer component that is designed to aid navigation through different types of data. Collapsible buttons represent different navigation modes, and when selected, child controls are exposed to facilitate the navigation mode chosen. Alternatively, the control can be used to simply switch between visible child controls, in much the same way as a tabcontrol does only with a different style of tabs.

Full design-time support is included of course, and working with the control at design time is much the same as working with it at runtime. As the navigation panes are selected, the client area of the control is updated to show their contents. This client area is a standard container control and can be used to host any type of child controls.

I'm looking forward to see it in RSS Bandit (Torsten Rendelmann is quite fast in adopting Tim's controls ;-)). How about one pane per category? I'd love to see that.

I decided to split the Avalon/WinFX/Longhorn/WinFS/Indigo stuff out of .NET 247, for fear of .NET 247 users getting annoyed with all this new leading edge stuff.  The site behaves mostly like .NET 247, except it's dedicated to newsgroup and discussion content.  There will be no article listings.

Well, at least my RSS feed is.

DonXML mentioned Jeff Julian's HTTP compression plugin for .Text., which uses Ben Lowery's HttpCompressionModule. Well, it's not just a plugin, since you have to change .Text's sources, but it is worth while: My RSS feed is reduced by 87 percent.